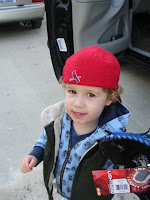 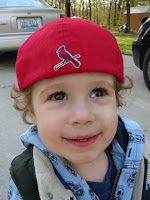 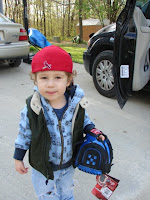 i am 37 weeks along today. finn came just past 38 weeks. i am trying not to get anxious, but i feel like this baby might not be too far away. so, because of that, we wanted to make sure we got in one last time of spoiling finn as an only child. we have talked about the new baby with him, but being that he is only two, and hasn't been around a whole ton of babies, i don't know that he really understands --- this could be a shocker for him!
so we took him out to get his very own baseball cap. he LOVES hats. really. he loves them. and when we found the hat, we also spotted the baseball gloves... i thought for sure that he would be too little for one of those, but we tried one out, and he was actually able to catch a ball with one... and he even picked out the one he wanted... justin wanted him to get a different one, but he insisted on this blue rawlings one. we went to borders to try to find him a book about becoming a big brother, but there wasn't much... so we went to eat at culvers. which was probably more for me than anyone else! anyway, we had great fun, and finn is totally crazy about his new things. we are keeping the glove and soft baseball put away until baby actually comes.
and for those of you who don't know... baby is scheduled to arrive may 16th around noon, if it doesn't make it's appearance before then... as of this past thursday i was measuring 39 weeks... so i am hoping for sooner than the 16th, but i guess we will all just have to wait and see.