it's stinkin' cold out

it's the coldest spell omaha has seen in two years. i was out scraping the frost off justin's car (as i do in the morning for my dear hubby) for approximately 10 minutes. by the time i made it back inside, i thought for sure my fingers would snap off. bring me summer time, and bring it quick.

finn is ten months old now. old enough to cause trouble, and old enough to suffer the consequences. he loves touching things he is not supposed to (i.e. floor lamps), chewing on things he is not supposed to (i.e. dog bones), and not napping when he is supposed to. even though his freedom has gotten him into quite a bit of trouble, it has also helped him develop some sweet little boy skills, like rolling a ball back and forth with dad. he has discovered that he can make other people laugh, and he loves to ham it up for a little attention. he'll strain his whole body until he starts to shake, his arms in the heisman trophy position... it's pretty funny. anyway, he's growing fast. faster than expected. 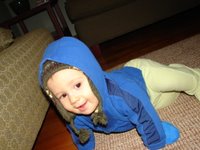 decked out for wintery coldness 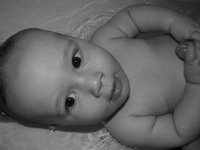 bath times are, oh, so much fun 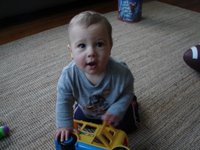 the school bus is a hit