the way kids who can't read yet read.

he also has this thomas the train book (which i have read so many times, i am slightly tempted to burn it...) which he reads to himself probably 30 times a day. he knows about three words per page, such as "chug chug chug," "poor thomas," "screech, bertie bus," hooray thomas." and he reads it with expression, which is what really makes me laugh. i'll try to get a video.

anyway, i love that finn loves books, and that he attempts to read them to the best of his ability, pretty much by memory.

twenty bajillion things left to do.

it has been decided, that whether or not our house is sold, finn and i will be joining justin in illinois in mid-april. the main reason for this? well, by that time i will be around 35 weeks pregnant... big enough that living on my own would be kind of scary. since we can't afford both a mortgage payment AND rent, we will be staying with justin's parents. hopefully the house will sell and we'll be able to get an apartment before the baby comes... but if not, i will just deal with it! this is becoming more and more of a reality for me, as there is just over six weeks before maybaby comes. i know a miracle could happen, but i'm not counting on it (but still praying for it!!!). anyway, we will have people staying in our house, so at least we won't have to worry about it being vacant and vulnerable.

anyway, when i think of all of the logistical things that need to be accomplished in the next three weeks for one little pregnant woman with a 2 year old, i get a little overwhelmed. but then i think, "hmmm, i have enough time to write a blog post... enough time to watch primetime tv - get to work you lazy bum!!"

i need a dose of adrenaline. too bad i can't have caffeine.

(on a side note - is it just me or does the word 'caffeine' abort all phonics rules... i before e except after c, as sounding as a as in neighbor or weigh... i never noticed this before.) 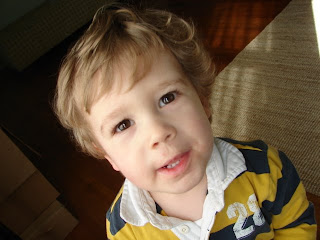 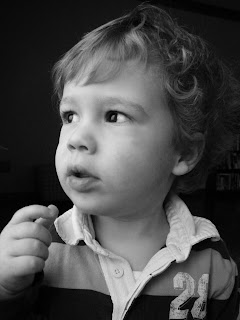 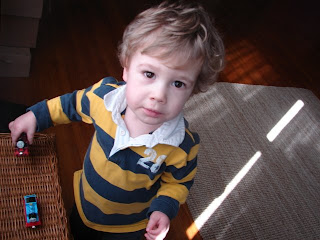 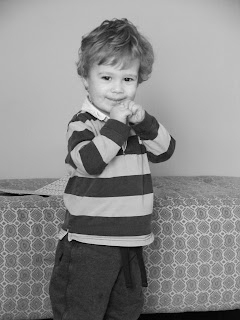 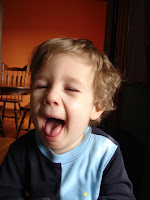 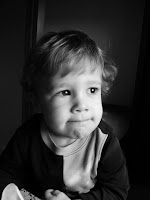 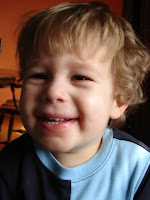 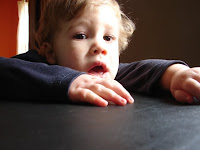 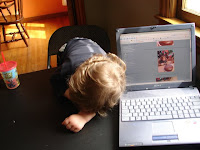 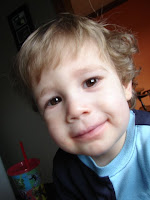 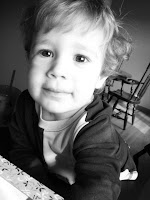 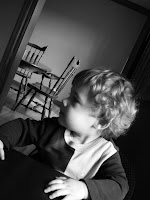 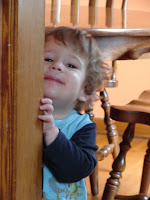 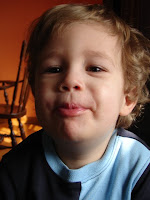 finn was sick on his birthday. i think the only thing he ate this day was a waffle. i plan to post a video of this same scene, where at the beginning, finn refuses any type of food - even cookies. poor little guy! oh well, he wasn't refusing his presents! 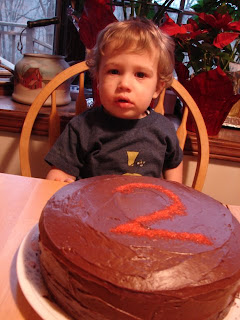 TWO!! i had great plans to make a football cake - but turns out i was sick too, so he got this boring ol' thing. 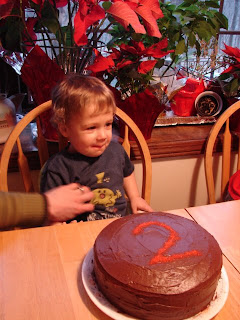 wait, is that a SMILE! these were hard to come by this day. 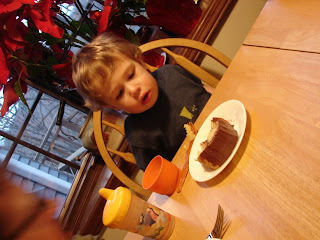 i suppose it didn't really matter what his cake looked like, since he didn't want to eat it anyway... maybe we should do a re-do birthday or something. 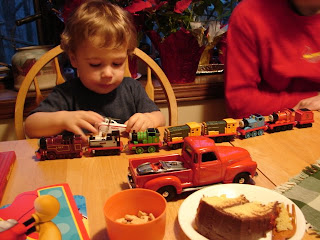 finn playing with some of his presents (no, he didn't get ALL of those train cars for his birthday, he got three to add to his collection tho... he loves those things.) he also got a variety of other vehicles, a curious george book, two styrofoam swords, and probably some other stuff.

well, we finally found out today what the deal was with those folks who said they planned to put in an offer on our house. turns out they still own a house in colorado, which they need to sell before they can purchase another house. they wanted to put in an offer that was contingent upon their house being sold. their realtor told them he didn't think we would go for it, which is why we never heard back from them - and he was right, that is something we won't go for. we don't know their situation, or what their house is like, so we don't know when theirs would sell... and we don't want to get sucked into something that could drag on forever. of course, there is always the possibility that their house could sell soon, in which case they would probably come back and actually put in an offer. so maybe pray that their house sells!

anyway, just thought i'd let you all know what was going on with that. frustrating, but at least now we know!

i started packing the upstairs closets today. i figure if i do a little here and a little there, the end won't be so much work. so that's what i'm doing. if you pack it, they will buy it... right? isn't that the saying!

the past few weeks have been a little insane.
finn and i left for illinois on friday, march 7, with caitlyn, to visit with justin and the in-laws. the first weekend was great. then my father-in-law got sick the following monday, flu-like symptoms. and it all went downhill from there.
it was tuesday, i think, when finn started with the cough, runny nose, and all around whiney-ness.
it was wednesday i started with the cough.
thursday was finn's birthday, in which he didn't even want to eat a piece of his own birthday cake. so sad.
friday was when i got hit with everything. justin's boss gave him a special day off so that he could spend it with finn and i, as a birthday present to finn... but it ended up being a day of taking care of us.
friday evening my fever started, and around 8pm it was 101.3. called my baby doctor, who said, "we highly recommend that you see someone once your temp is over 100.1, so go now..." which meant we were off to the ER, being that all other places were closed.
we got right in. had a breathing treatment for the ol' asthma. got my blood taken. had an influenza test (they shove a skinny q-tip up your nose into your sinuses). they listened to the baby's heartbeat to make sure it was not in distress (it wasn't). the flu test came back positive, which meant i was taking the influenza A strain back with me. and they gave me a prescription for vicodin. WHAT!? for the FLU!! i was having really bad headaches, and not sleeping. the next three or four days are a bit of a blur, as i was in and out of sleep. it's hard being a mom when all you want to be is a kid being taken care of by a mom! especially when your kid is sick too!
it was tuesday or wednesday before i started feeling a little better. and even now i still don't feel like i am better. oh, maybe that's because now i have a SINUS infection.
well, justin ended up driving back to omaha with me on good friday. justin's brother cam and his family drove back too, as they found a good deal on a car in omaha. they left saturday, and justin just left this morning on the train. so after three weeks of having someone around all of the time, it is back to being just me and finn. in a quiet house.
we did have someone come look at our house twice this weekend, and it was said by their realtor that they had planned to write up an offer - we haven't heard back yet, so who knows. but that would be wonderful. and i would start packing like a maniac. 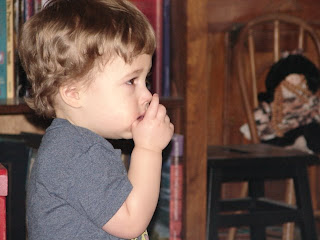 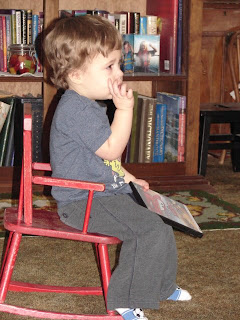 he's two today. and unfortunately, also sick. here he is getting in his first showing of 'cars' for the day. so far, he has gotten a sweet fleece spiderman blanket from grammie dee and grandpa ken. the rest of the loot will come later today.

i can't believe how fast these two years have gone, and although there have been difficult times, how easy it has been. finn is the greatest kid. we love you little guy!!

we are.
today we have watched...

we woke up at 4:45ish this morning and have slept for about an hour today.

it's the cough, runny nose, and yucky rear end for finn.
and the cough, EXTREME heartburn, and large amounts of sleepiness for me.
fun.

-caitlyn came to visit. her train (supposed to arrive at 10:30) was 2.5 hours late. thank goodness for ring-a-words, which took me through that last long hour. we laughed, we ate, we napped, we even got an oil change in the van.

-dr. appt. this last week revealed nothing new. everything is as it should be. and dr. thinks all is going perfectly. let's hope that lasts.

-no house news. nothing. nada. except that temps are supposedly getting warmer, which should draw more people. and a buyer. and the end of this craziness.

-finn turns two in less than a week. he does new things (read: not always good new things) everyday. he is obsesses with vehicles and remains an avid fan of puppies. and kitties. and, well, all animals.

-my parents and brother are going to switzerland on tuesday. this sounds like fun.

-the quilt is coming along, although i made a few other things, which stalled the process a little. hope to catch up with production this week :)

for me. i really really wanted to take a nap. but i couldn't stop thinking about all of the craziness and uncertainty that is happening in my life! this baby is coming, sometime in the next 10 weeks or so. that isn't even the scary part... that's the one thing i know for sure! no matter where i live, no matter where all of my belongings are, this baby will come. a certainty.

but the list of unknowns and what ifs keeps growing, and it is weighing heavy on my heart. it is getting scarier and scarier by the day. how can you plan for the unknown? isn't that sort of an oxymoron? i am trying my hardest to trust the that the Lord has a plan, and that it is the best plan for our lives... i just wish i knew what it was! if i knew, i could plan, i could adjust to knowing what was going to happen. even if it wasn't the plan i would choose, at least i could get used to it.

but i don't know it. i can't plan. i have no control. just go with the flow (which is totally against everything i know and practice...) and it's hard to be at peace with that. perhaps i am being taught a lesson. i really am NOT the one in control... of anything.

there is so much to do in the next two months. how can i just take a nap?
instead, i packed three boxes and wrote this post.

(** anyone else notice my baby widget on the left side of the blog just went from 82 days to FIFTY TWO DAYS!!! ha. someone is playing a cruel joke on me, i know it) 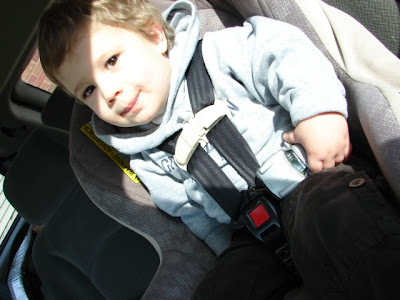 here is a cute picture of finn from yesterday. he was happy because he didn't have to wear a coat in his carseat. that makes me happy too. 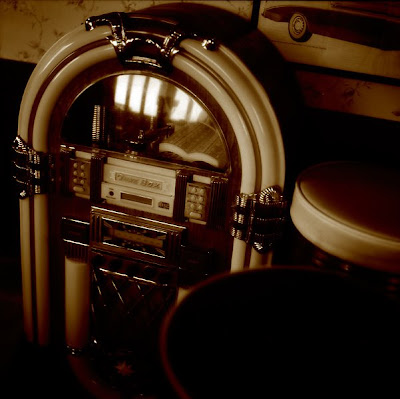 what gets me through long days at home? yep, the oldies station. they are upbeat and rarely depressing. we usually try to start the morning with some nice classical music, but after breakfast, it is time to rock out. there is something about the oldies that makes me feel alive, makes me feel like i can accomplish anything. and so that's why we listen.