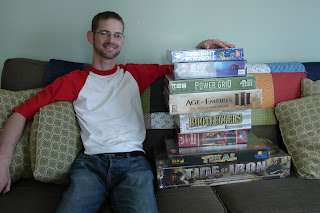 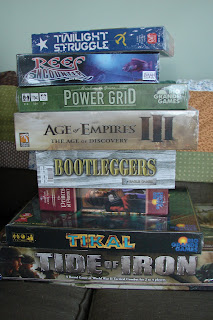 oh dear. this all started with friendly games of puerto rico with chari and darin, over two years ago. since then a little beast inside of justin has been waiting to emerge, waiting for the right moment. the "game hoarder" has been set loose. this beast was lured out of its cage by justin's elder brother, jaybirdy, who in the last year or so has collected more boardgames than stars in the sky (extreme exaggeration, but you get what i mean). these are not boardgames like pictionary or candyland. these are intense, take-two-to-three hours, strategy soaked, boardgames. i admit, i enjoy playing these games. but never, NEVER, would i buy 8 in one sitting. actually, i would probably never buy one, just play other peoples. (these puppies aren't cheap). but justin sold his xbox 360 and decided to use a lot of his money from the proceeds for this monster purchase.
anyway, this is the tower of games that appeared on our doorstep yesterday. 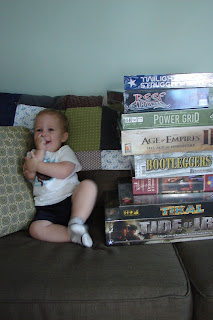 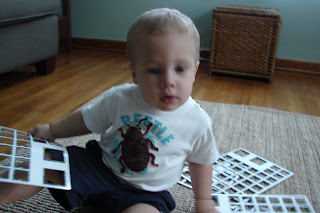 and here is finn playing with all of the cardboard cutout pieces, what fun!

That might be 35 pounds, eh? Just think of all the hours of enjoyment that this little cache will provide.

You think Jaybird has games? I can't wait for you to come over and see my modest collection...

183 games is not that many, relatively speaking (besides, 39 of those are expansions).

Now if you ask my wife, its too many.