i love you, oh LORD, my strength.

the LORD is my rock, my fortress and my deliverer,
my GOD, my rock, in whom i take refuge,
my shield, the horn of my salvation, my stronghold.

i call upon the LORD who is worthy to be praised,
and i am saved from my enemies.

the wednesday word is an attempt to keep myself accountable in memorizing scripture, something i have not done very well with in years past. join me.

this is the cool nylon zip thingy, that i think is supposed to be used as a pencil holder for school kids, but that i now use as my wallet. it has been a smooth transition from traditional checkbook wallet. 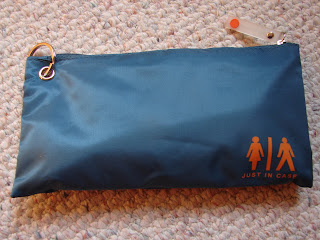 we got about five inches of snow saturday night. finn has never really gotten to play in the snow before, so we figured this may be the last big snow of the year, let's see what he does... he sat there. he didn't really care. then again, he may have bundled up so much he couldn't move... maybe next year. 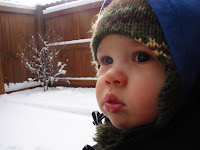 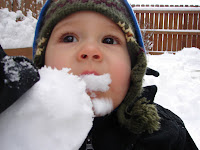 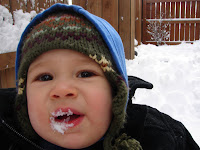 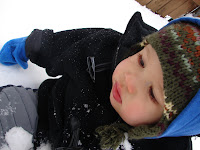 i'm running on four hours of sleep. my child will not nap for reasons unbeknownst to me. we may go to the mall to pass the afternoon hours. or maybe just a long drive somewhere. that could be relaxing.

i am bored and i was trying to think of something to put on here... so here is a list of the most played songs on my itunes.

everyone should check out philip glass... he is wonderful.

in other news, i bought this really cool nylon zip thing to replace my old wallet. i think it's meant to be like a pencil holder, but it is too cool to be used for that purpose. and i am too lazy to take a picture of it, or else i'd show it to you.

and i went to panera today to say hi to some of my old friends who work there. i was in that store for 20 minutes, and i REEK of panera smell. brings back memories of carving squashed food out of my shoe soles. remember, caron??

also finn only took a one hour nap today, so i put him down for a second one, and he is less than happy right now. so it's a fun afternoon....

oh, and i am secretly excited for american idol tonight, are you going to vote??? 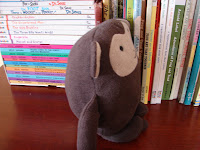 my mom got this monkey for finn last summer. it's the only thing he is really attached to. every night when we put him in bed, we hand finn the monkey and he hugs it so tight!

well the other day finn threw up on "monk" (as we like to call him). the tag said you should only surface wash this stuffie, but there was no way a surface wash was gonna take care of that stench. so i threw him in the washer.

pre-wash monk was quite slender and kind of rectangular. post-wash monk is round and fat. BUT at least it smells good now! someday the monkey fairy may have to pay a visit...

here is a sugary treat i made today, courtesy of christmas time bingo at grandma rachel easley's. i won two heart shaped cake pans, so i figured today would be the perfect day to give it a whirl... add a little food coloring and some sprinkles, voila, a valentine masterpiece... 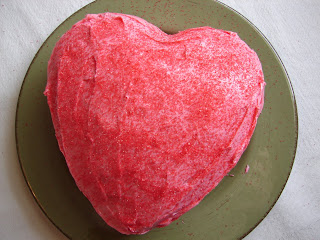 and here is finn decked out in everything red that i could find... he doesn't care, but it's fun for me! 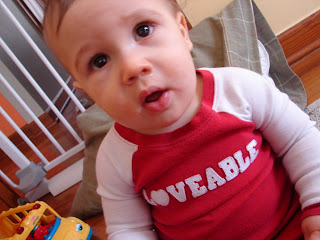 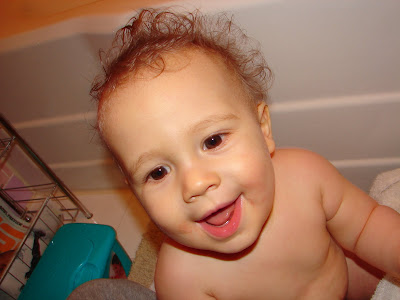 they came, they left

the weekend went by too fast... but we enjoyed every minute of it! us four adults even got to shed the kiddo's for a night out on the town. thanks to the cam easley's for trekking all the way out to nebraska to visit us, we miss you.

here are a few pictures from this weekend... 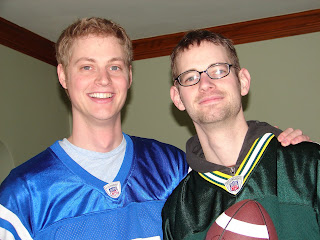 cam and justin swapped jerseys on a dare... cam wearing a MANNING jersey??!! did we ever think we'd see the day?! 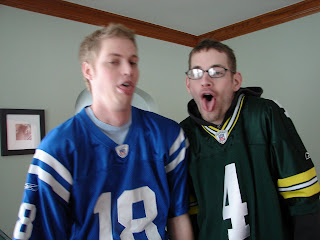 and here they are showing a mutual dislike for eachother's teams 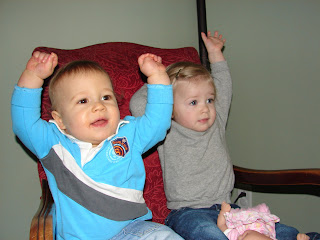 finn and caroline are "SOO BIG" 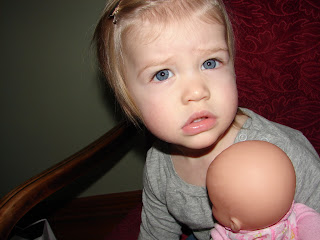 and i just thought this one was cute 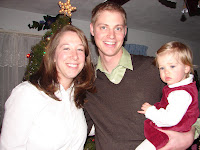 usually we are the ones making the long drive to illinois, so this weekend is a great treat for us!

can't wait for you guys to be here!! only a few more hours!!

i woke up with what they call "aura," one of the first signs of migraines that many people experience. it must have been in the final stages because it wasn't long before my head started pounding and the nausea kicked in. i took my medicine. and begged justin to stay home from work - which thankfully he did, even though he has had a lot going on lately.

it wasn't 45 minutes later (by which time i thought the medicine should be kicking in) that i started throwing up. not exactly the flavor of choice when all you've had is water and medicine (though i suppose it's better than indian food...) so i called the dr. like anyone would do to ask him if i should take more medicine, since i wasn't sure how much of that medicine had dissolved into my system. of course the doctors never actually TALK on the phone, so i left the message with the receptionist, trying to convey that i was in a lot of pain. one hour. two hours. three hours. i was sick of waiting and being in pain. i called, and i got the answer in like two seconds - was it so hard to pick up the phone to call a patient?? sheesh. they prescribed me new meds. by the time justin got them and i had them in my system it was already lunchtime.

they seem to take the pain away, and make me a lot less dizzy than the others -- the question is, is if they will help me at the onset of the migraine, which is where the other meds lacked. anyway, it wasn't a great day.

when i was in high school, a freshman i think, i had migraines really bad, stress related (high school is a stressful time, let's face it). my vision would go wacky, and then i'd get a horrible headache combined with some wacky nausea. not cool. i'd get two or three a week for about two months. but after that spell, i'd get them a few times a year - nothing to bat your eye at.

the last few months have been another story. they haven't been horrible, maybe one migraine and a few little headaches each month since october... but since the new year i have had three migraines. they generally put me out for the whole day. and having a part time at home job, along with being an at home mommy, that isn't easy to be out of commission for a WHOLE day.

so today, as i woke up and realized it was gonna be one of those days, i had had it. that was it. i was sick of telling my boss i couldn't work for the day. sick of sitting finn in front of the tc for three hours and shutting him in his room for the rest of the day (though he probably could care less, he loves to play by himself)... so i called the doc and got right it.

he gave me some meds, zebutol or something. they make me REALLY dizzy. i have to hold on to the wall if i want to walk around, or splat. they do take the pain away though. he wants me to try them out for a bit, at the onset of a migraine and then throughout the day. the catch is, if i go through this whole bottle in three months, there is something deeper. thus would follow the drama - the head scan, and probably meds every day for the rest of my life, assuming there is nothing wrong with my ol' brain.

so, prayer is needed. firstly, that the migraines would just not come back EVER again. that would be ideal. secondly, that if they do return, that the docs are able to find a good solution to this problem. thirdly, that i don't dwell. i have a tendency to get caught up in problems, issues. then, the more i think about them, the worse it gets. worse scenarios play in my head when i am trying to go to sleep at night... total drama - my downfall.

i appreciate your prayers.
-c

finn really likes playing with this sand toy set that my mom bought for him before he was even born. he doesn't have a clue yet what any of the pieces are for (digging, making a sand castle...). he is just content holding them and playing, even in the dead of winter. this is a starfish sand mold in the picture... 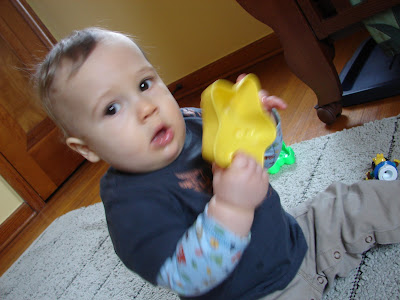